You should continue working with your project 1 partner for today’s lab, out of your su19-proj1-s***-s*** repository.

Pull the skeleton code from GitHub as usual. Open IntelliJ and remember to click on Import Project and select the Lab 6 directory in your su19-proj1-s***-s*** repository.

There is no worksheet today. This lab assignment will be worth 3 points.

In today’s lab, we’re going to continue our discussion of linked lists by introducing a new way of organizing programs through encapsulation. By hiding our linked list behind an abstraction barrier, it will no longer be naked and will be more user-friendly.

Module
A set of methods that work together as a whole to perform some task or set of related tasks.
Encapsulated
A module is said to be encapsulated if its implementation is completely hidden, and it can be accessed only through a documented interface.

The implementation of IntList that we learned about in Lab 5 is impractical to use at scale. In it, the notion of a node in the list and the list itself are not separate. This means that someone who wants to use the IntList class would need to spend a lot of time adding null checks and handling errors that might come as a result of accidentally or intentionally modifying the item or next of a list. By giving users direct control to the IntList data structure’s internals, in some ways, we’ve actually made it harder to reason about the correctness of a program.

We want to separate the idea of the list as an entity from an entry in the list, much like an abstraction barrier. We’ll see that this design philosophy of encapsulation will come up over and over again for each of the data structures we study in the coming weeks.

Let’s update our lab 5 IntList with encapsulation, which we will now call a SLList (Singly Linked List). Note that in order to emphasize the encapsulation in box-and-pointer diagrams, we will be breaking the normal box-and-pointer rule that we don’t put Objects inside other Objects. 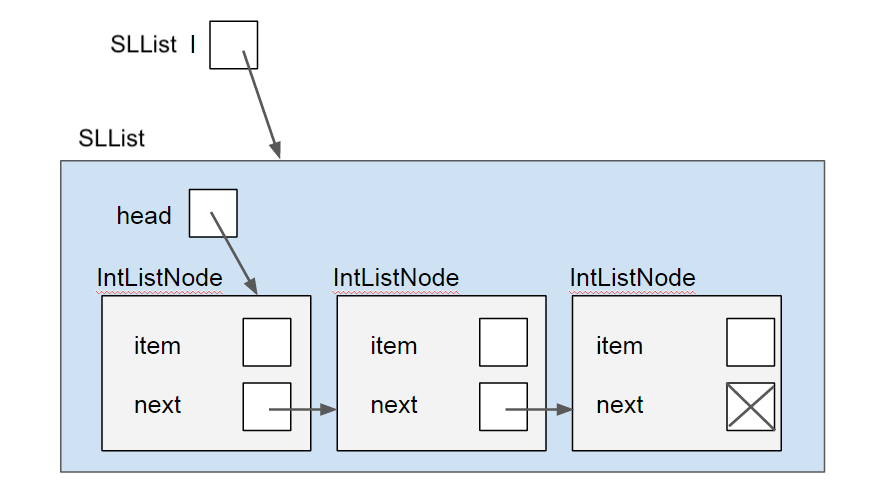 All operations on the list are handled through an instance of an SLList object, which keeps a single instance variable head in order to track the first node in the linked list. The SLList object operates directly on the IntListNodes that make up the SLList. Note that IntListNode does not need any methods (other than some utility methods such as toString() and equals(), which you will use later). The main effect of using encapsulation, by using a reference to the head of a list, is allowing users that wants to interact with the SLList to know nothing about the internal representation of the list or how the operations will take place. Instead, the users could simply operate on list as a whole and the SLList representation itself will take care of the operations, including any null checks, size checks, or further operations.

Although encapsulation shields users of our data structure from having to deal with cumbersome null checks, we as the implementors of our linked list class still would have to handle them. However, we can eliminate null checks and simplify our code greatly with usage of a sentinel node instead of a head pointer. The sentinel node always exists (even when our list is empty), and does not represent an actual node in the list. Its next field represents the front of the list, unless the listt is empty. The sentinel’s item is some meaningless value (in this example, we have chosen 42, but it doesn’t matter what its value is; a sentinel’s item should never be accessed). The last node in the list should have its next pointing back at the sentinel, and an empty list is represented by just a sentinel node whose next points back to itself. In a box-and-pointer diagram, a empty singly-linked list with a sentinel looks like this: 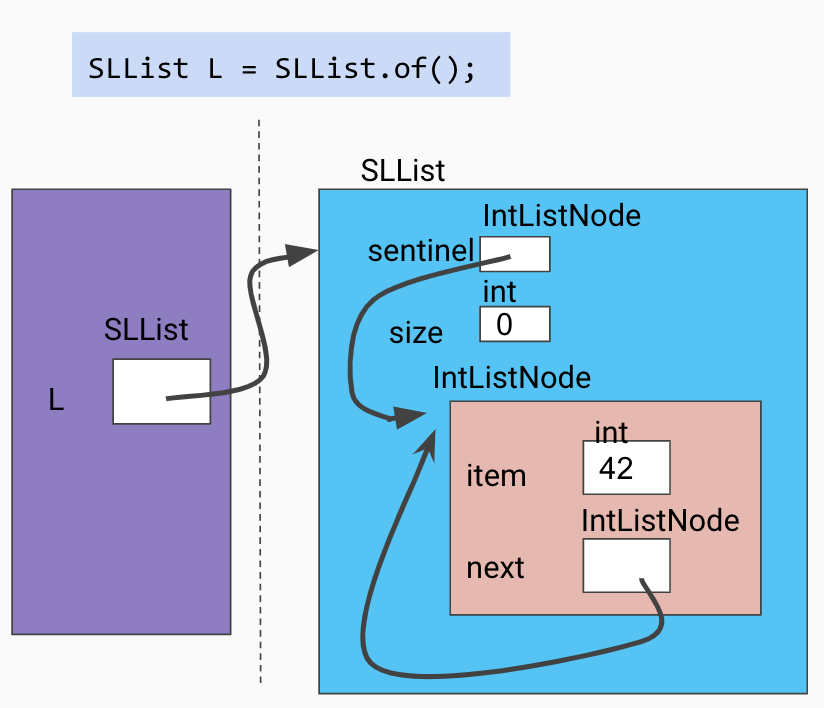 This has many benefits. When iterating through the list, we do not need to worry about reaching a null pointer at any point; when our moving pointer reaches the sentinel, it’s the end of the list. When inserting and removing nodes, we don’t need to manually handle being near the end or beginning or being the first or last element inserted or removed of the list; the code can be written with disregard for null-checking edge cases and it will still work properly because of the sentinel.

Just like yesterday, we will want a toString method so that our linked lists will be displayed in a more readable format when using the debugger or if using print lines, and we will also want an equals method so that our calls to assertEquals in our tests will verify whether two lists contain the same numbers. Overriding equals() allows us to define how two objects should be considered equal. Recall that checking equality of two objects a and b with a == b defines equality only if a and b are the same reference. Here is an illustration of this difference: 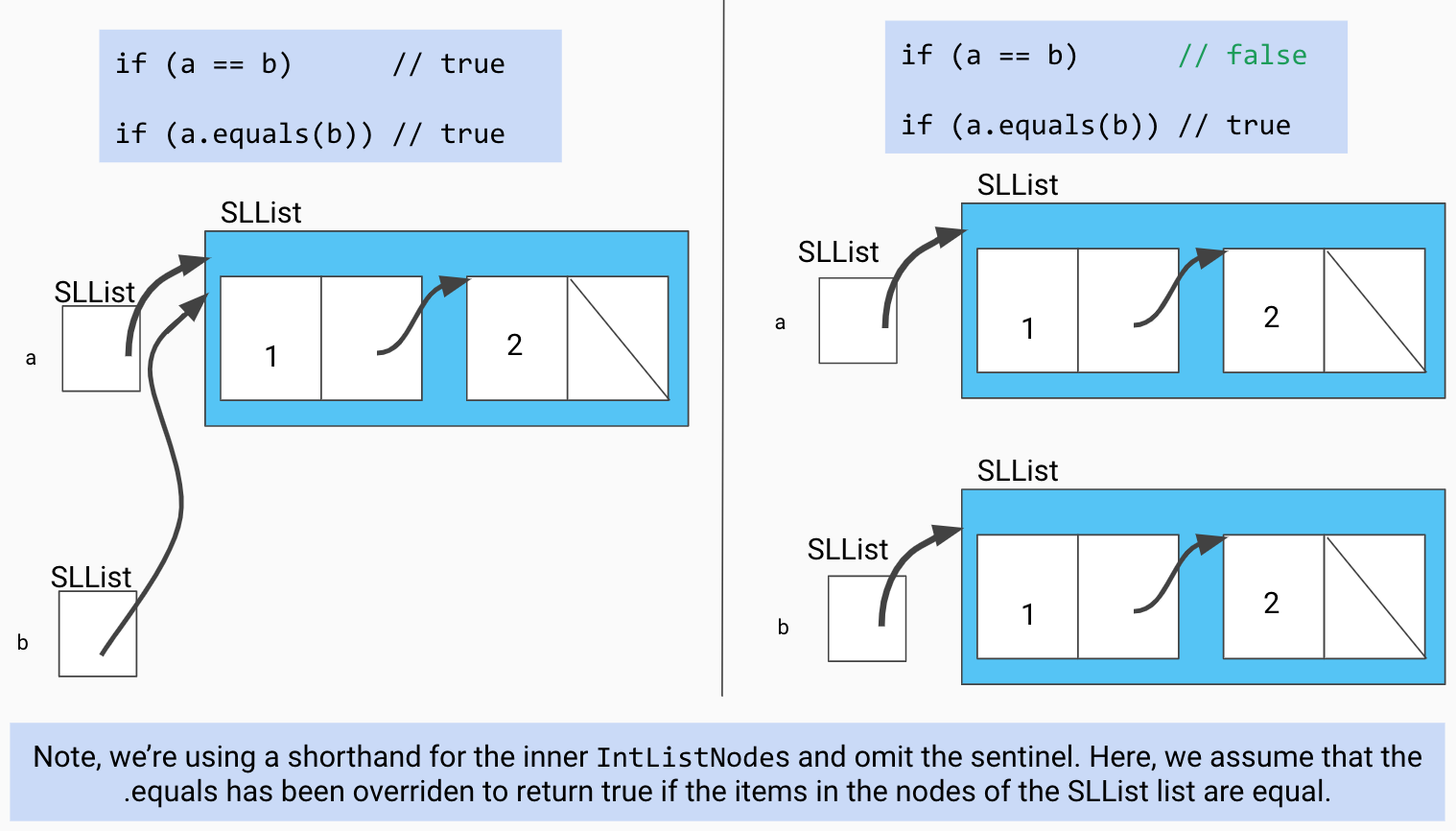 As a bit of practice working with these improved lists, implement the add method in SLList.java, which adds the int x to the list at the specified int index. Be sure to look at and utilize the given completed methods.

In the case that index is greater than or equal to the current size of the list, x should just be added to the end of the list. For example, inserting into index 10 of an empty list should result in a list of size 1 with the inserted item in position 0.

Check your solution with the tests provided in SLListTest.java.

Over the next few steps, we’re going to be completing the method reverse in SLList using our current SLList implementation.

We will assume the restriction that the reversal is to be done in place, destructively, without creating any new nodes.

However, don’t implement the method just yet!

Make sure that you’re familiar with how to test with JUnit from the section on Testing in the last lab.

We’re going to write a test before we write reverse, as part of a methodology called test-driven development (TDD).

Thinking about test cases before writing code can help us write better code more quickly compared to rushing ahead and trying to solve the problem without first having considered all the different scenarios.

Add JUnit tests in SLListTest.java to cover at least the following three situations:

Try running the test you just wrote; it should fail. This is a good sign because it means our tests are working as expected.

Implement reverse recursively, and rerun the tests until all of them pass. A helper method that accepts an IntListNode will be helpful.

Hint: This is a challenging problem. The following diagrams show the progression of reversing a linked list recursively using a helper method called reverseHelper.

Given a reference to the true first node in our linked list, we will take the recursive leap of faith on the rest of the linked list as shown below. 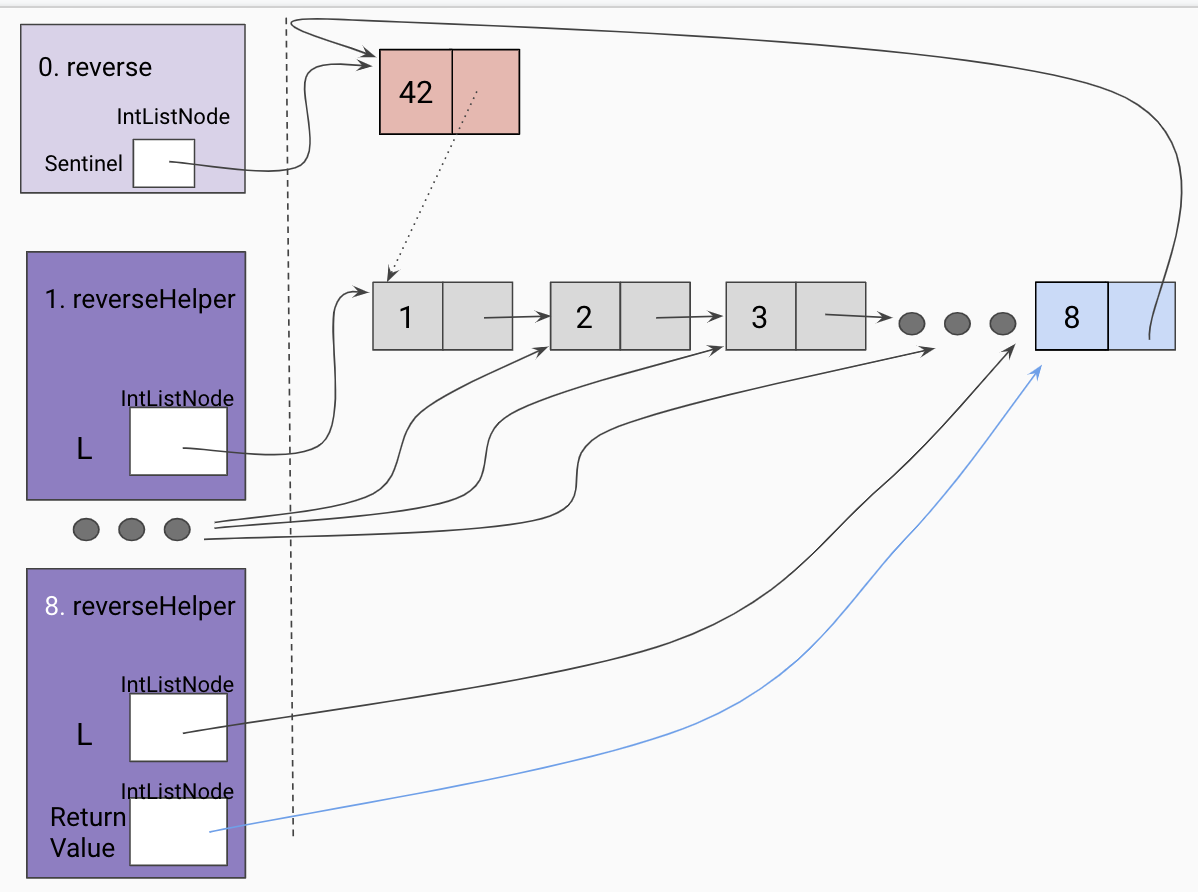 Trusting our recursive leap of faith, we assign a temp variable to the returned value of our recursive call, which should have reversed the current frame’s L tail. 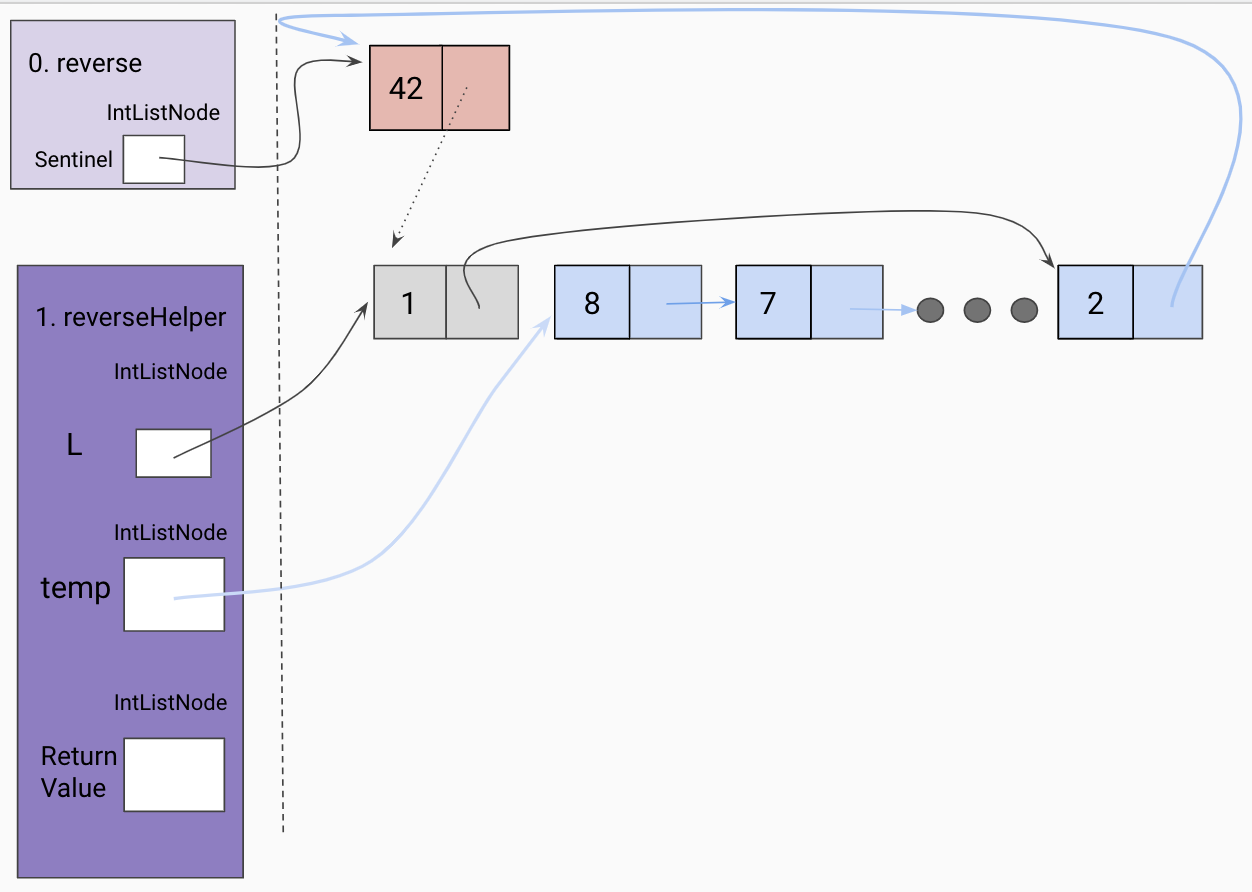 Set the end of the returned list to the current frame’s L. 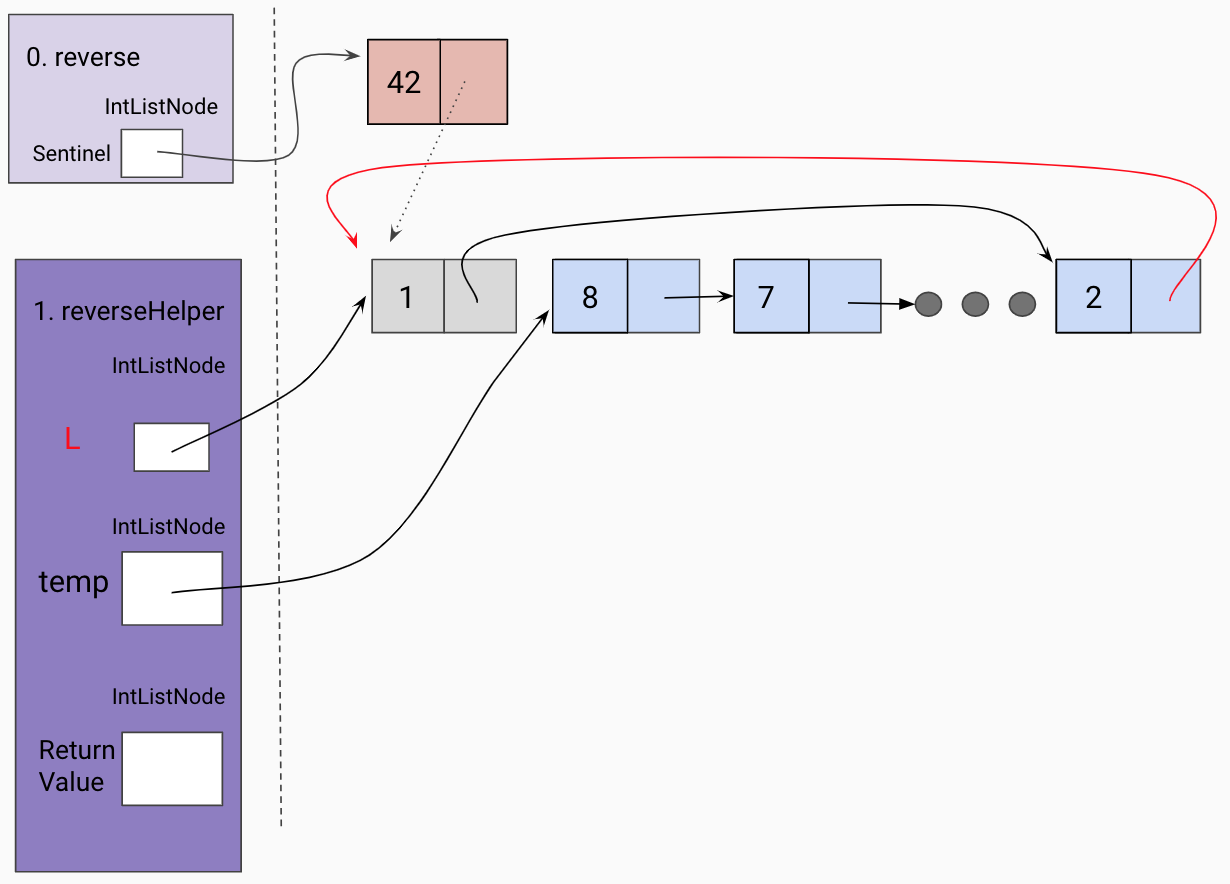 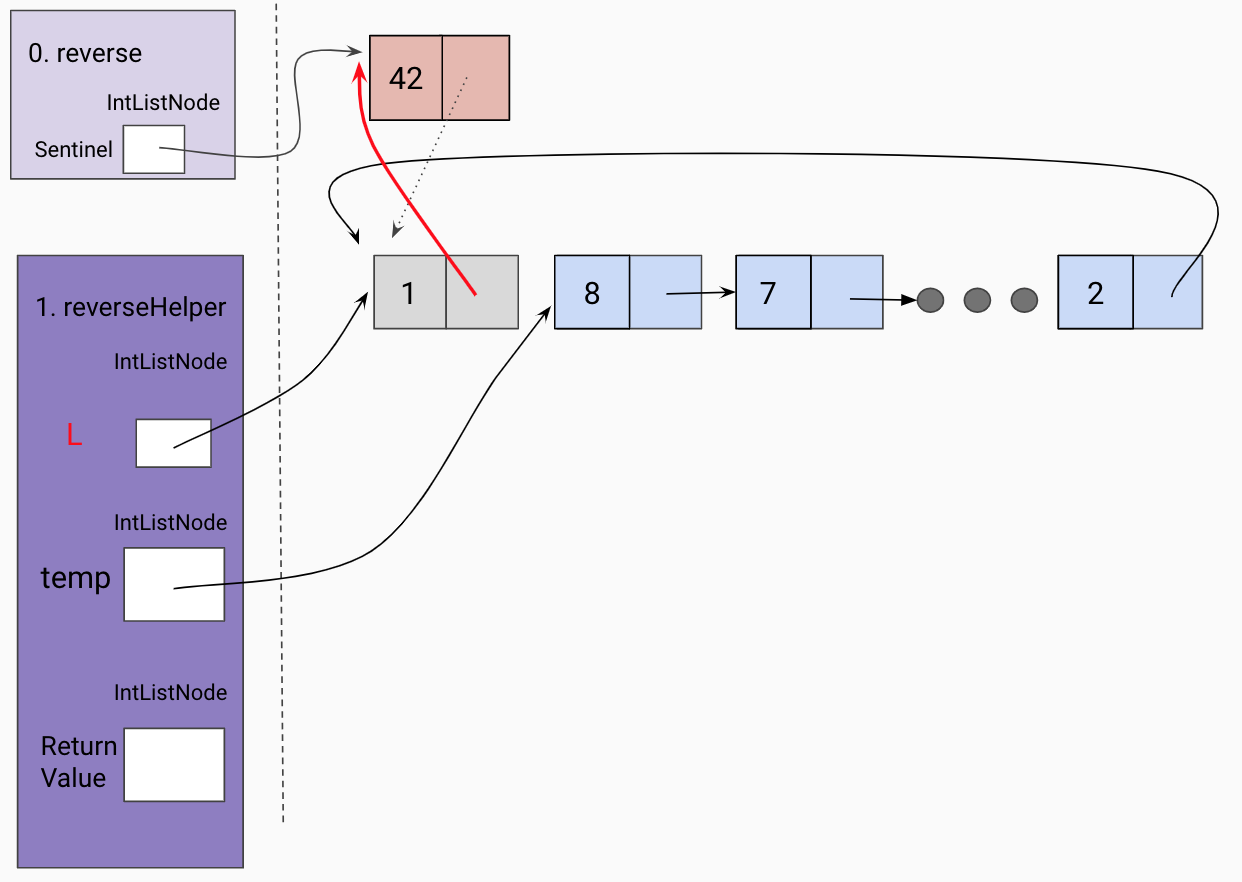 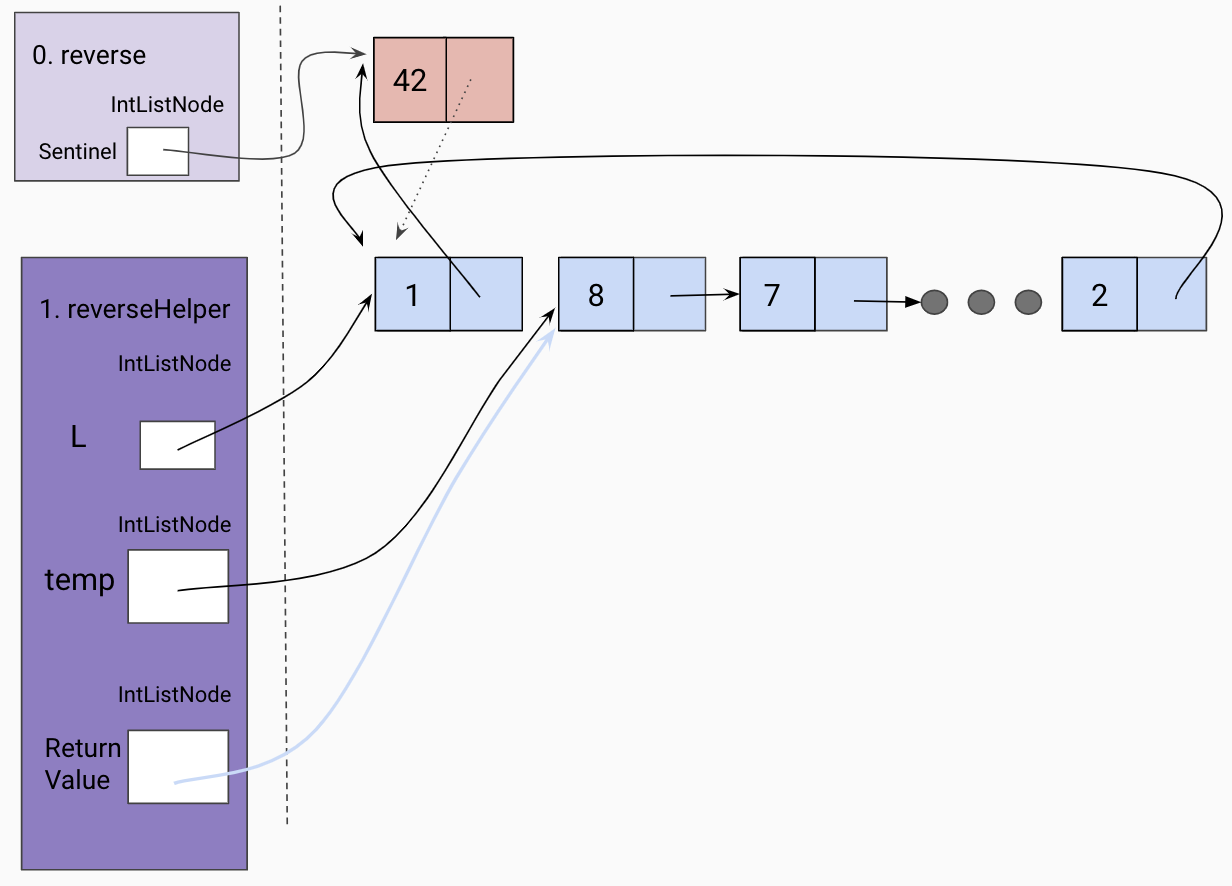 Update sentinel to point to the front of the reversed linked list.

Some people find the rush of TDD addictive. You basically set up a little game for yourself to solve. Some people hate it. Your mileage may vary. Whether you personally enjoy the TDD flow or not, writing tests will be one of the most important skills you learn here at Berkeley, and getting test-infected will save you and your future colleagues an enormous amount of time and misery.

If you find the concept of test-driven development interesting, or just want to learn more about testing philosophy and the conversation around TDD, here are a couple interesting leisure readings:

There are some major issues, both efficiency-wise and code-simplicity-wise with the linked list implementations we’ve been working with so far:

The solution to these problems is to use a doubly-linked list. Each node keeps track of the node after and before itself. If we aren’t using a sentinel, then instead of just a head pointer, the list object maintains both a head and tail pointer, to the front and back of the list respectively. It looks like this: 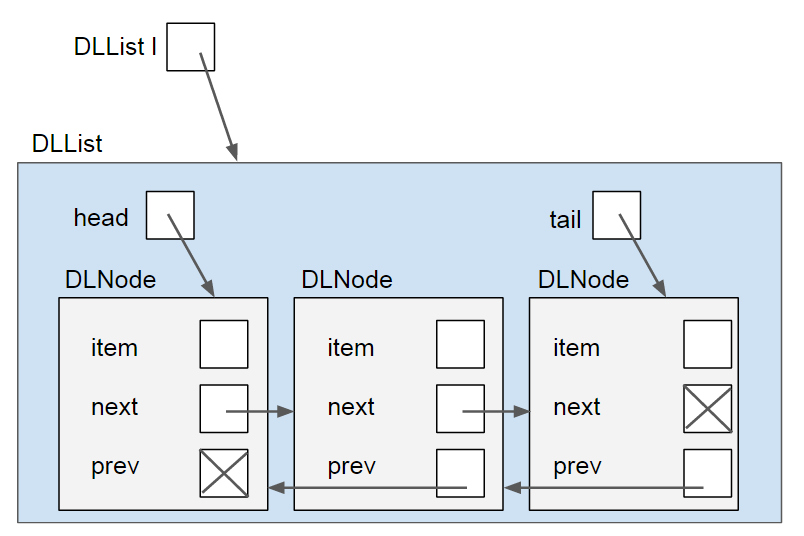 This adds a bit of complexity to the operations, but allows for constant time insertion to the front and back, and allows the user to traverse the list either forwards or backwards. Additionally, this allows the list to delete any nodes, even in the middle of the list, in constant time without traversing to the middle as long as it has a reference to the node that needs to be deleted.

If we are using a sentinel, then it will look like this: 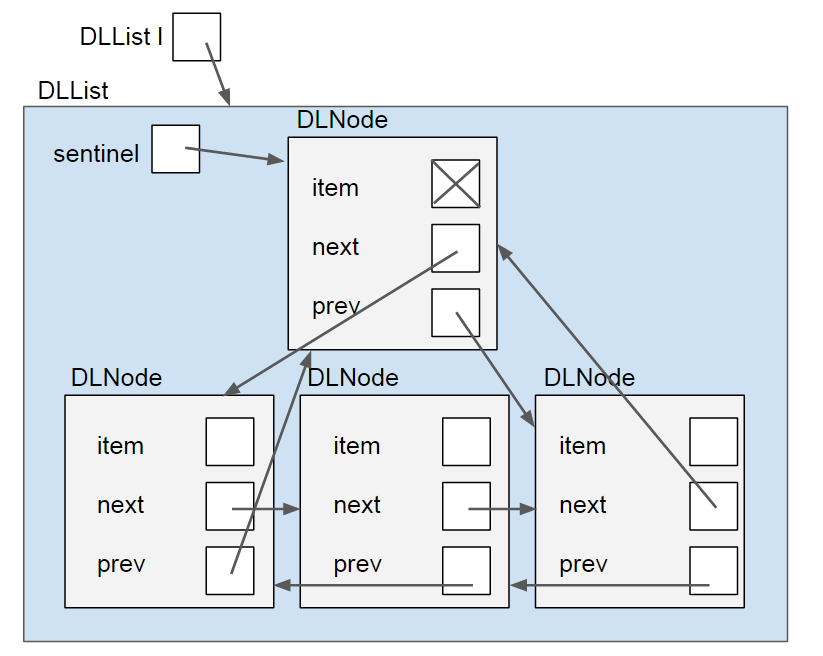 Note that the sentinel’s item is marked with an “X”, again because that value is irrelevant. If our list is of non-primitive items, then we can make it null. If it is of primitive items (like the ints we’ve been using, then it can just be any arbitrary value (since primitives cannot be null)).

With all of these enhancements, the encapsulated doubly-linked list with a sentinel node is typically used in practice as the linked list representation, like in Java’s own standard library class, java.util.LinkedList.

An invariant is a fact about a data structure that is guaranteed to be true (assuming there are no bugs in your code). This gives us a convenient checklist every time we add a feature to our data structure. Users are also guaranteed certain properties that they trust will be maintained. For example, an SLList with a sentinel node has at least the following invariants:

Be sure that any invariant broken while performing an operation on a data structure is restored by the end of the function, so that subsequent function calls can rest assured that they are acting on a valid data structure and that all of the instance variables hold the proper values.

Yesterday, we worked with a “naked” IntList, which was difficult to use because knowledge of implementation details were necessary in order for its use.

Today, we solved this problem through encapsulation. By nesting our node class inside another class, we can setup an abstraction barrier to shield our users from the details, and we can provide utility functions to allow users to operate naively upon our data structure.

To eliminate the need to have if statements that protect us from NullPointerExceptions, we can use a sentinel.

For efficiency purposes, we can introduce backwards prev links as well to make it doubly-linked.

There is no worksheet for today.

After you submit this lab, spend some time implementing your LinkedListDeque for Project 1 with your partner while you’re still in lab.