For demos of the algorithms discussed in this lab, look here

This lab is very reading heavy, with fairly short coding sections. You should try to fully understand each section before moving on. If you have any confusions, clarify with an AI or your TA!

Before we talk about the topics of today’s lab, let’s talk about insertion sort and quicksort’s runtime in the “average” case.

For every inversion, insertion sort needs to make one swap. Convince yourself that this is true with an example: in the array [1, 3, 4, 2], there are two inversions, (3, 2) and (4, 2), and the key 2 needs to be swapped backwards twice to be in place. Thus the runtime of insertion sort is \(\Theta(N + k)\), where \(k\) is the number of inversions. Hence, if \(k\) is small, linear, or even linearithmic, insertion sort runs quickly (just as fast as, or even faster than, merge sort and quicksort).

The average case runtime of quicksort depends on the pivot chosen. Recall that in the best case, the pivot chosen is the median, meaning 50% of the elements are on either side of the pivot after partitioning.

The worst possible pivot is the smallest or largest element of the array, meaning 0% or 100% of the elements are on either side of the pivot after partitioning.

How often does the bad-pivot case come up if we pick pivots uniformly at random? If we consider half of the array as bad pivots, as the array gets longer, the probability of picking a bad pivot for every recursive call to quicksort exponentially decreases.

For an array of length 100, the probability of picking all bad pivots, \(7.8 \cdot 10^{-31}\), is so low that if we ran quicksort every second for 100 billion years, we’d still have a significantly better chance trying to win the lottery in one ticket.

Of course, there’s the chance you pick something in between, and the analysis can get far more complicated, especially with variants of quicksort. For practical purposes, we can treat quicksort like it’s in \(O(N \log N)\).

Is it possible to do better than \(O(N \log N)\) in the worst case for these comparison-based sorts?

Suppose we have a scrambled array of \(N\) numbers, with each number from \(1\) to \(N\) occurring once. How many possible orders can the numbers be in?

Each different order is called a permutation of the numbers, and there are \(N!\) possible permutations.

Now let’s look at the logarithms of both these values:

This is an amazing claim, because it doesn’t just analyze one algorithm. It says that of the thousands of comparison-based sorting algorithms that haven’t even been invented yet, not one of them has any hope of beating \(O(N \log N)\) time for all inputs of length \(N\).

In the worst case, a comparison-based sort (with 2-way decisions) must take at least \(\Omega(N \log N)\) time. But what if instead of making a 2-way true/false decision, we make a k-way decision?

If you have not watched this week’s lecture, it is advised you watch the last segment of it before trying to understand the algorithm through writing.

Suppose we have an array of a million Strings, but we happen to know that there are only three different varieties of Strings in it: “cat”, “dog”, and “person”. We want to sort this array to put all the cats first, then all the dogs, then the people. How would we do it? We could use merge sort or quicksort and get a runtime proportional to \(N \log N\), where \(N\) is roughly one million, but can we do better?

We can propose an algorithm called counting sort. For the above example, it works like this:

Here’s what everything would look like after completing the algorithm. Notice that the values of starts have been incremented along the way. 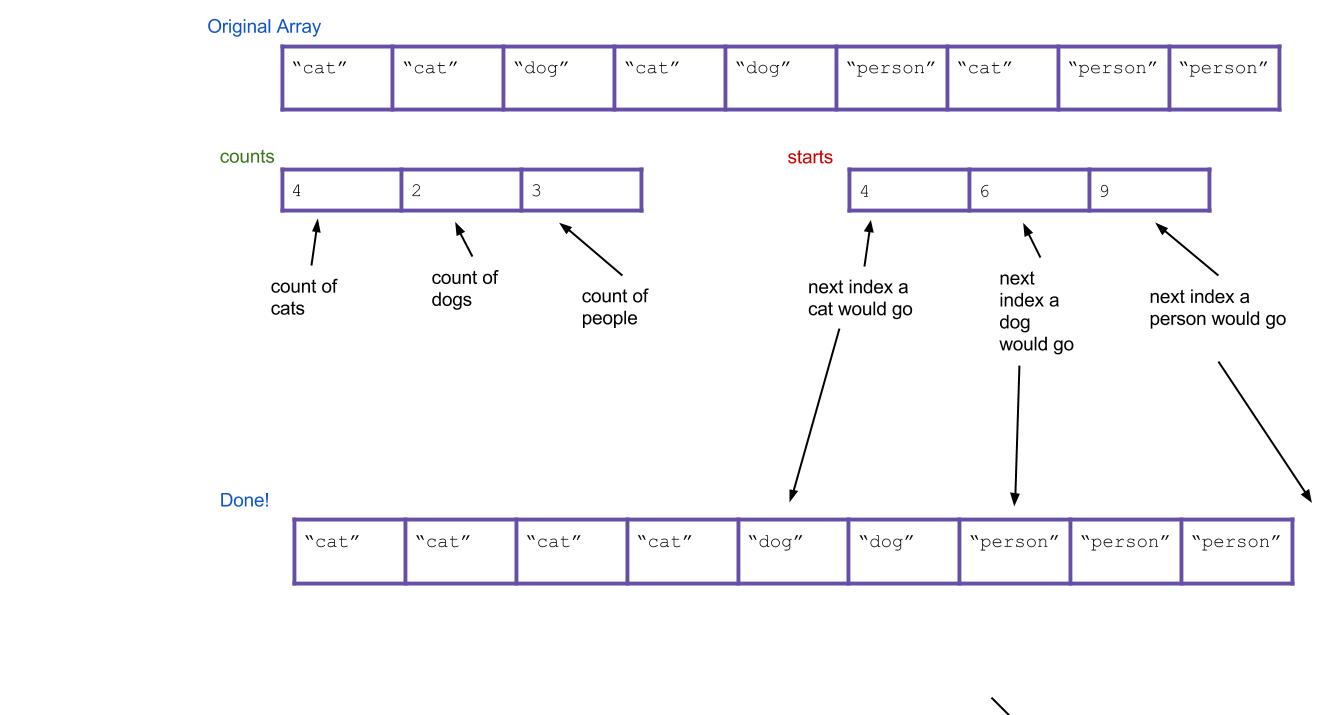 This written explanation of counting sort may seem complicated, so it is highly recommended that you take a look at this counting sort visualization before you proceed, as it might make this algorithm more intuitive.

Refer to the above steps if you’re having trouble with this method!

Inspect the counting sort method you just wrote. What is its runtime? Consider the following two variables:

Discuss with your partner, then highlight the next line for the answer:

Wow, look at that runtime! Does this mean counting sort is a strict improvement from quicksort? Not quite, because counting sort has two major weaknesses:

The latter point turns out to be a fatal weakness for counting sort. The range of all possible integers in Java is just too large for counting sort to be practical in general circumstances.

Suddenly, counting sort seems completely useless. However, with some modifications that we’ll see in a little bit, we can come up with a pretty good sorting algorithm!

However, we now have all the ingredients necessary to describe radix sort, another linear-time non-comparison sort that can be practical.

Let’s first define the word, radix. The radix of a number system is the number of values a single digit can take on (also called the base of a number). Binary numbers form a radix-2 system; decimal notation is radix-10. Radix sorts examine elements in passes, and a radix sort might have one pass for the rightmost digit, one for the next-to-rightmost digit, and so on.

We’ll now describe radix sort in detail. We actually already described a procedure similar to radix sort when talking about sorting in a library catalog in the last lab. In radix sort, we will pretend each digit is a separate key, and then we sort on all the keys at once, with the higher digits taking precedence over the lower ones.

Here’s an example of using the first strategy. Imagine we have the following numbers we wish to sort:

First we sort them by the first digit:

Then we sort them by the second digit, keeping numbers with the same second digit in their order from the previous step:

Finally, we sort by the third digit, keeping numbers with the same third digit in their order from the previous step:

Here’s some pseudocode for the first strategy:

(the 0th digit is the smallest digit, or the one furthest to the right in the number)

Notice that both LSD and MSD radix sort call another sort as a helper method (in LSD’s case, it must be a stable sort). Which sort should we use for this helper method? Insertion sort? Merge sort? Those would work. However, notice one key property of this helper sort: It only sorts based on a single digit. And a single digit can only take 10 possible values (for radix-10 systems). This means we’re doing a sort where the variety of things to sort is small. Do we know a sort that’s good for this? It’s counting sort! Counting sort turns out to be useful as a helper method to radix sort when it comes to sorting the elements by a particular digit.

Now that you’ve learned what radix sort is, it’s time to try it out yourself. Complete the lsdRadixSort method in DistributionSorts.java by implementing the countingSortOnDigit method. You won’t be able to reuse your countingSort from before verbatim because you need a method to do counting sort only considering one digit, but you will be able to use something very similar.

Disclaimer: Radix sort is commonly implemented at a lower level than base-10, such as with bits (base-2) or bytes (base-16). This is because everything on your computer is represented with bits. Through bit operations, it is quicker to isolate a single bit or byte than to get a base-10 digit. However, because we don’t teach you about bits in this course, you should do your LSD radix sort in base-10 because these types of numbers should be more familiar to you.

If you are up for a challenge, feel free to figure out how to implement radix sort using bytes and bit-operations (you will want to look up bit masks and bit shifts).

To analyze the runtime of radix sort, examine the pseudocode given for LSD radix sort. From this, we can tell that its runtime is proportional to numDigitsInAnInteger * (the runtime of stableSortOnDigit).

Let’s call numDigitsInAnInteger the variable \(D\), which is the max number of digits that an integer in our input array has. Next, remember that we decided stableSortOnDigit is really counting sort, which has runtime proportional to \(N + K\), where \(K\) is the number of possible digits, in this case 10. This means the total runtime of LSD radix sort is \(O(D(N + K))\)!

What is the runtime for MSD radix sort? How does it differ from LSD radix sort’s runtime? Discuss with your partner.

Hint: Unlike LSD radix sort, it will be important to distinguish best-case and worst-case runtimes for MSD.

Let’s go back and analyze the LSD radix sort runtime (despite the best-case runtime of MSD radix sort, LSD radix sort is typically better in practice). You may have noticed that there’s a balance between \(K\), the number of digits (also known as the radix), and \(D\), the number of passes needed. In fact, they’re related in this way: let us call \(L\) the length of the longest number in digits. Then \(K \cdot D\) is proportional to \(L\).

In fact, in practice we shouldn’t be using decimal digits at all - radixes are typically a power of two. This is because everything is represented as bits, and as mentioned previously, bit operators are significantly faster than modulo operators, and we can pull out the bits we need if our radix is a power of two.

Without further knowledge of bits, it’s difficult to analyze the runtime further, but we’ll proceed anyways - you can read up on bits on your own time. Suppose our radix is \(K\). Then each pass of counting sort inspects \(\lg K\) bits; if the longest number has b bits, then the number of passes \(D = \frac{b}{\lg K}\). This doesn’t change our runtime of LSD radix sort from \(O(D \cdot (N + K))\).

This means our true runtime must be \(O(N)\) if \(b\) is less than \(\lg N\) or otherwise \(O(N \cdot \frac{b}{\lg N})\), (plug our choices for \(D\) and \(K\) into the runtime for LSD radix sort above to see why that’s the case). For very typical things we might sort, like ints, or longs, \(b\) is a constant, and thus radix sort is guaranteed linear time. For other types, as long as \(b\) is in \(O(\lg N)\), this remains in guaranteed linear time. It’s worth noting that because it takes \(\lg N\) bits to represent N items, this is a very reasonable model of growth for typical things that might be sorted - as long as your input is not distributed scarcely.

Linear-time sorts have their advantages and disadvantages. While they have fantastic speed guarantees theoretically, the overhead associated with a linear time sort means that for input lists of shorter length, low overhead comparison based sorts like quicksort can perform better in practice. For more specialized mathematical computations, like in geometry, machine learning, and graphics, for example, radix sort finds use.

In modern libraries like Java and Python’s standard library, a new type of sort, TimSort, is used. It’s a hybrid sort between merge sort and insertion sort that also has a linear-time guarantee - if the input data is sorted, or almost sorted, it performs in linear time. In practice, on real-world inputs, it’s shown to be very powerful and has been a staple in standard library comparison sorts.

To receive credit for this lab:

Credit to Jonathan Shewchuk for his notes on the lower bound of comparison-based sorting algorithms.