Each assignment will have an FAQ linked at the top. You can also access it by adding “/faq” to the end of the URL. The FAQ for Lab 5 is located here.

Please do not skip this section. Partnerships are strongly recommended for labs. You must complete all partner work for the rest of the semester in the shared repository. See the Collaboration Guide for more information.

Here’s a picture of a simple implementation of a linked list that contains the items “A”, “B”, and “C” (can you draw the corresponding picture for an array that stores these items?). A linked list consists of nodes that are chained together. Here we represent nodes with a generic class ListNode. Each node contains some item called item. As you can see, the items form a sequence. In this example, the linked list items are Strings, though our linked list will contain ints instead, just like an int[]. 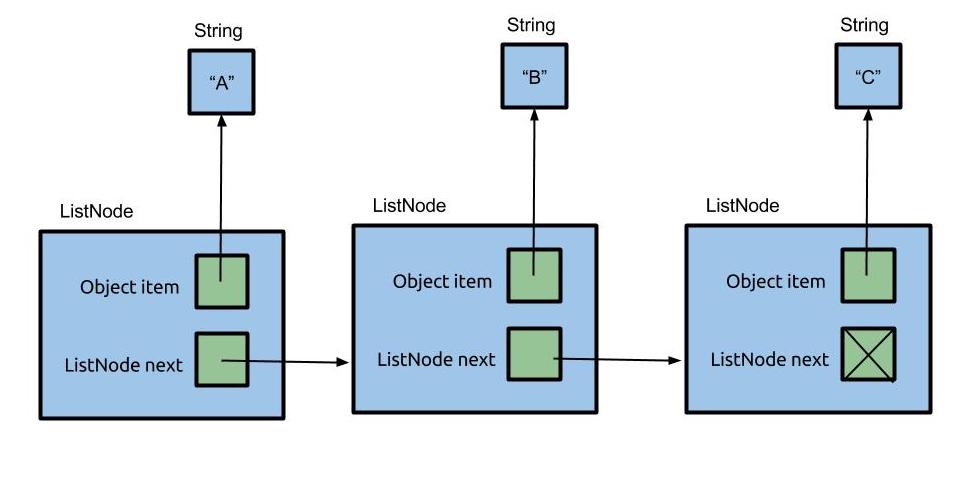 For this lab, we’ve written JUnit tests for you in IntListTest.java. Open it up and read through it. The first thing you’ll notice are the imports at the top. These imports are what give you easy access to the JUnit methods and functionality that you’ll need to run JUnit tests. If you want to read more about JUnit, refer to Lab 4.

Exercise: The get Method #

For example, lets say you have an Intlist with items 44, 79, and 109. If get(1) is called, you should return 79. If the position is out of range, get should throw IllegalArgumentException with an appropriate error message (just type in throw new IllegalArgumentException("YOUR MESSAGE HERE")). Assume get is always called on the first node in the list.

This type of function is called a reducer, as it reduces the whole list down to a single value! You might remember this idea from CS61A.

There are two ways we could go about solving this problem. The first way is to traverse your existing initial IntList and actually change the items stored in your nodes. Such a method is called destructive because it can change (mutate or destroy) the original list.

Observe that the IntList.of() method makes it much easier to create IntLists compared to the brute force approach. This might be useful for writing your own tests…. ;)

The second way is called non-destructive, because it allows you to access both the original and returned lists after execution. This method returns a list containing enough new IntList nodes such that the original list is left unchanged.

In practice, one approach may be preferred over the other depending on the problem you are trying to solve and the specifications of the program. We will talk about such trade-offs throughout the rest of the semester!

The reason that dSquareList is destructive is because we change the values of the original input IntList L. As we go along, we square each value, and the action of changing the internal data persists.

It is also important to observe that the bits in the origL box do not change. Objects are saved by reference, meaning the value tied to the variable will point to a memory address rather than the integer values in our list. Thus, though this method is destructive, it is changing the value saved in the memory location referred to by origL, not the value within origL itself. For more about this, refer to Lab 2.

Note: The choice to return void rather than a pointer to L was an arbitrary decision. Different languages and libraries use different conventions (and people get quite grumpy about which is the “right” one). We have the flexibility to decide when writing destructive methods when mutating objects passed in as arguments. Talk to your partner about why this is and try to think of settings where one would be preferable over the other.