There are no new skeleton files for this lab. Instead, create a directory called lab19 in your su20-p*** directory and copy your Graph.java file from the last lab into this directory. Then, make a new IntelliJ project. 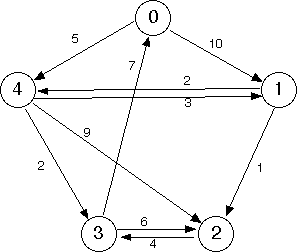 Observe the weights on the edges (the small numbers in the diagram), and note that the weight of an edge (v, w) doesn’t have to be equal to the weight of the edge (w, v), its reverse.

A common problem involving a graph with weighted edges is to find the shortest path between two vertices. This means to find the sequence of edges from one vertex to the other such that the sum of weights along the path is smallest.

Initialization
While Loop
Loop until the fringe is empty.

One caveat: although we often use the analogy of finding the shortest path on a map to describe Dijkstra’s algorithm, note that it’s possible to try to run Dijkstra’s on any arbitrary graph structure. This means you may come across a graph with negative edge weights.

For instance, consider a real-life example graph where the vertices are the locations. As a taxi driver, you are paid to drive customers between certain locations. However, you may lose money when you drive to pick up a new customer. 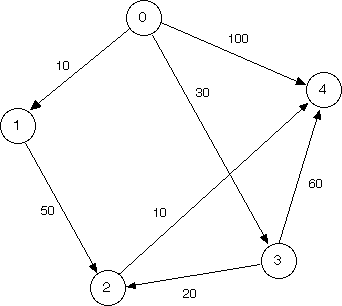 Answer below (highlight to reveal). Each of the entries is listed as dist (from) e.g. if there was a listing for vertex 2 that was 3 (4) it means that for this iteration the distance to vertex 2 is 3 and the path to that comes from vertex 4. Also asterisks denote vertices which have been removed from the fringe and should no longer be considered.

We will address this problem in a slightly different, more memory efficient way in the A* algorithm you will implement in Project 3.

With the remaining time in lab, get started on Bearmaps by reading through the spec and getting a feeling for what will be expected. We encourage you to get started on the project today!

In the project, we’ll be working on implementing a similar shortest paths algorithm that runs on a weighted, undirected graph of the city of Berkeley. One advantage of working with a map that represents real distances in the world is that we can take advantage of information about the world like the straight line distance between two points and use that as a heuristic to help guide our search process.

Although the first two parts of Bearmaps are unrelated to this lab, the second portion will draw heavily on the algorithm learned in this lab assignment, as explained in the next two paragraphs.

Recall that Dijkstra’s algorithm can help us solve the single-source shortest paths problem by computing the shortest paths tree from a source vertex, s, all other vertices in the graph. We might think of Dijkstra’s algorithm as similar to breadth-first search on unweighted graphs since it’s just trying to expand its fringe outwards by picking the nearest vertices first, without any regard for moving in particular direction.

But if we only care about going from one start vertex to one end vertex, we can use a distance heuristic to point the search algorithm in the direction of the goal. This smaller problem of finding the shortest path between a pair of points is called single-pair shortest paths, and in the project, we’ll implement the A* Search algorithm to speed up the computation for this shortest path. We recommend spending some time playing around with this visualization to gain more intuition about the differences between A* and Dijkstra’s.

Warning: Although the A* Search portion of Bearmaps will build upon ideas from this lab, the graph representation is not exactly the same (but it should still feel familiar). This means that any code you wish to copy over from this lab will likely need to be modified before it can be used in the project.

Graphs have very real applications! In Bear Maps, we use a graph to represent data about the real world. We can also use graphs to solve other problems in computer science such as: